Trained in design, Fiaz Elson only made the transition to working with glass in 1998 when she did the highly regarded glass course at Staffordshire University. Since graduating in 2001 she has established herself as one of the most original glass artists. Gallery owners have been quick to appreciate her work and she has an impressive list of exhibitions to her name in New York, Switzerland and in Britain.

In 2004 she was one of the selected artists in the prestigious British Glass Biennale Exhibition in Stourbridge. From her work called ‘Passion’, a 30cm long sculpture shaped as a flat tear-shape with vibrant blood red and black the predominant colours, it was easy to see why her work has been variously described as “seductive, monumental and mysterious”. The monumental quality is apparent on whatever scale she decides to work.

Most recently she has ventured into garden commissions with one exceptional piece called ‘Parallel Verve’ to be shown at the ‘In and Out’ Art Glass Exhibition as part of the Fresh Air Art event in Cirencester in the autumn of 2008.

The sculpture consisting of two monoliths is simultaneously transparent and solid depending on the angle of sight and the movement of the spectator around the garden. But equally she can achieve the same dramatic effects in a tiny 10 cm. bead shown in the ‘Tempest’ Glass Bead Exhibition as part of the International Glass Festival in Stourbridge in August 2008.

Entitled “Calm Before The Storm” the tiny jewel is kiln cast using optical glass in which she also uses fritted glass, a glass batch which has been melted and ground, to deliberately produce random bubbles and veils in the glass as it fuses together in the mould. Elson’s total command of her material especially the technically difficult casting processes and her original combination of polishing effects, allows her to express her stated intent to suggest hidden spaces, containment and emotions with an ease usually more apparent in more mature glass artists.

Already a highly respected glass sculptor the more recent evidence of her works makes her a must-have in any collection of studio glass.

My work is expressive in its form, provoking an emotional[...] 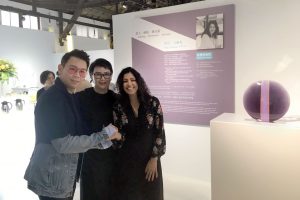 September saw Fiaz flying to Taipei to open a show[...]